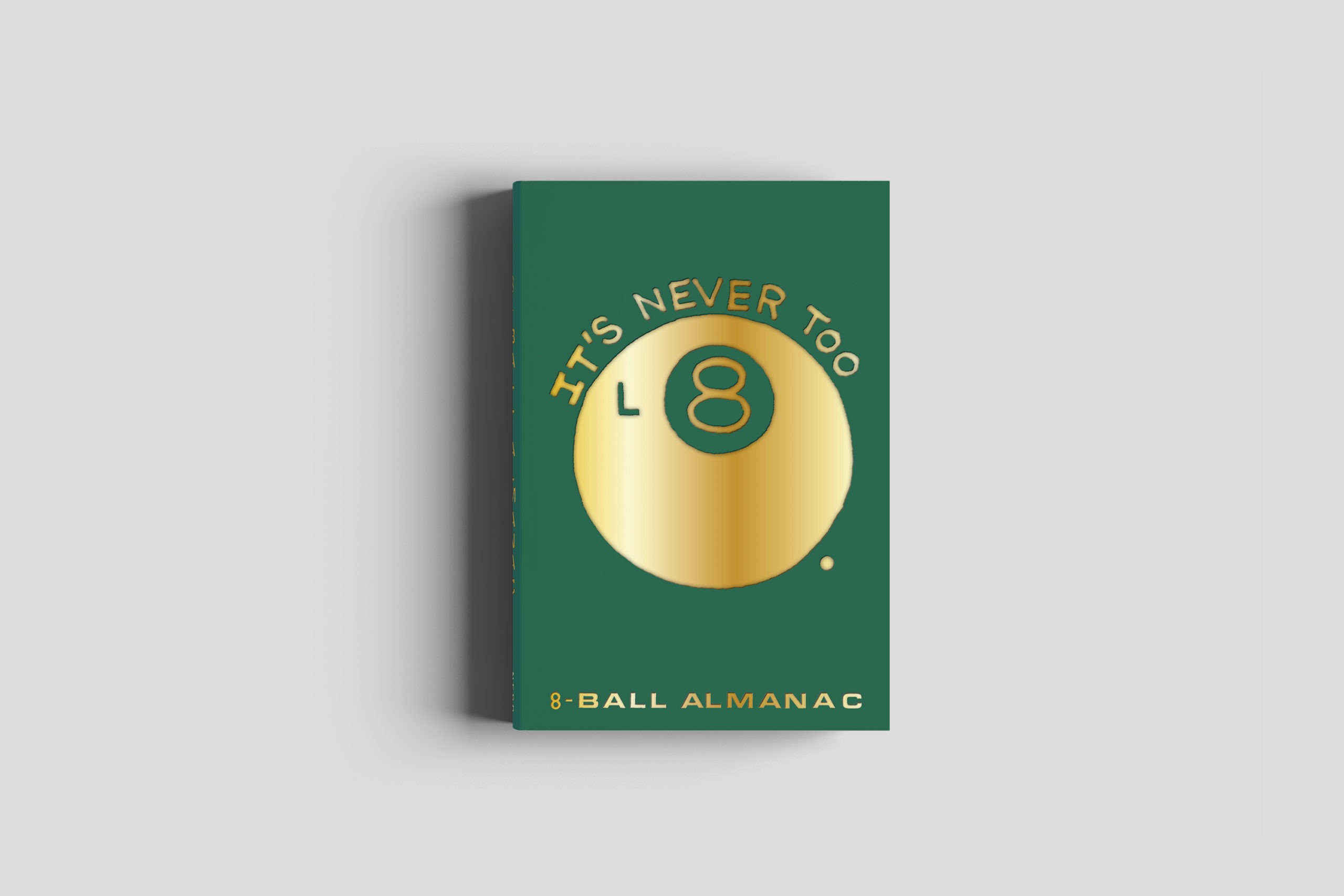 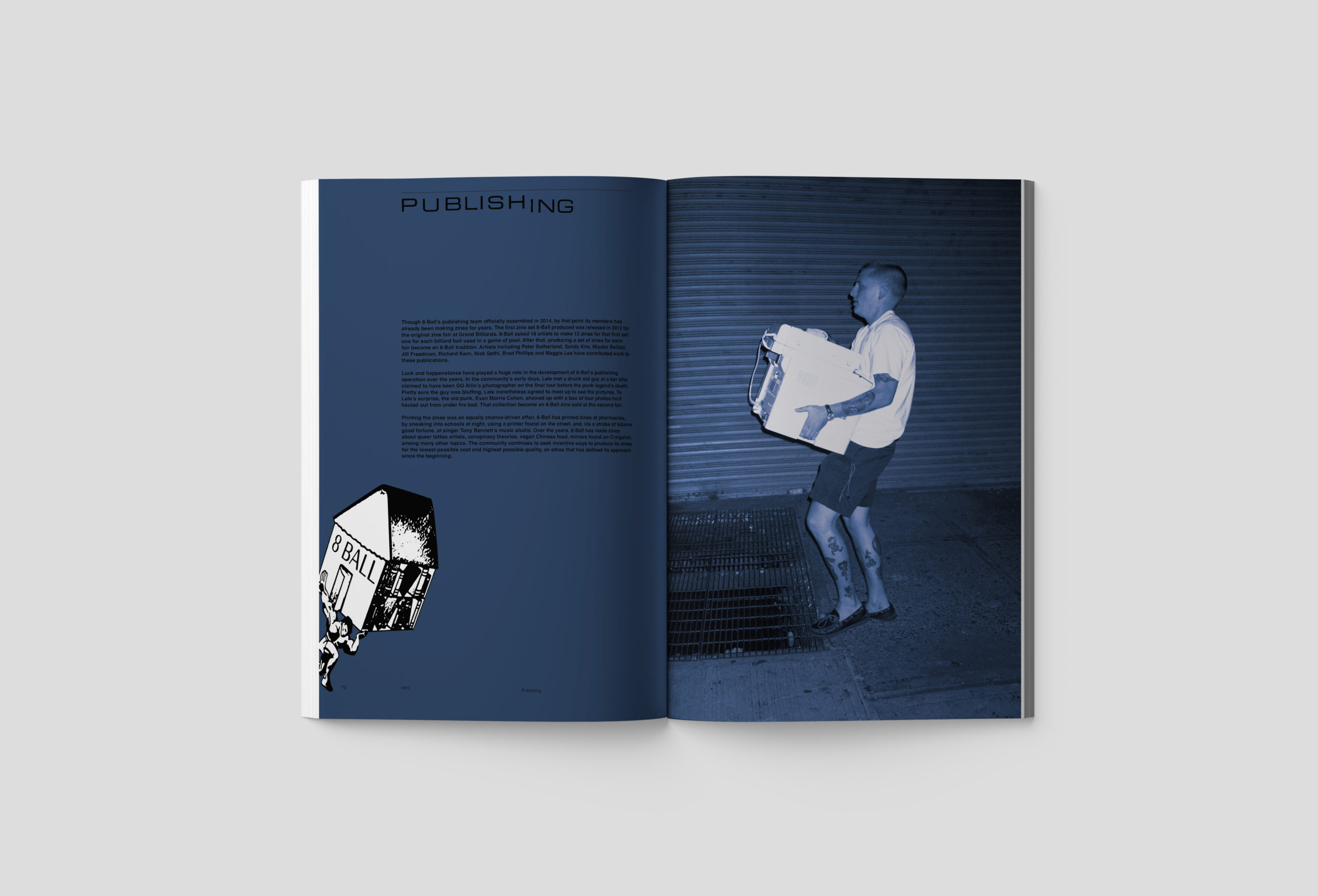 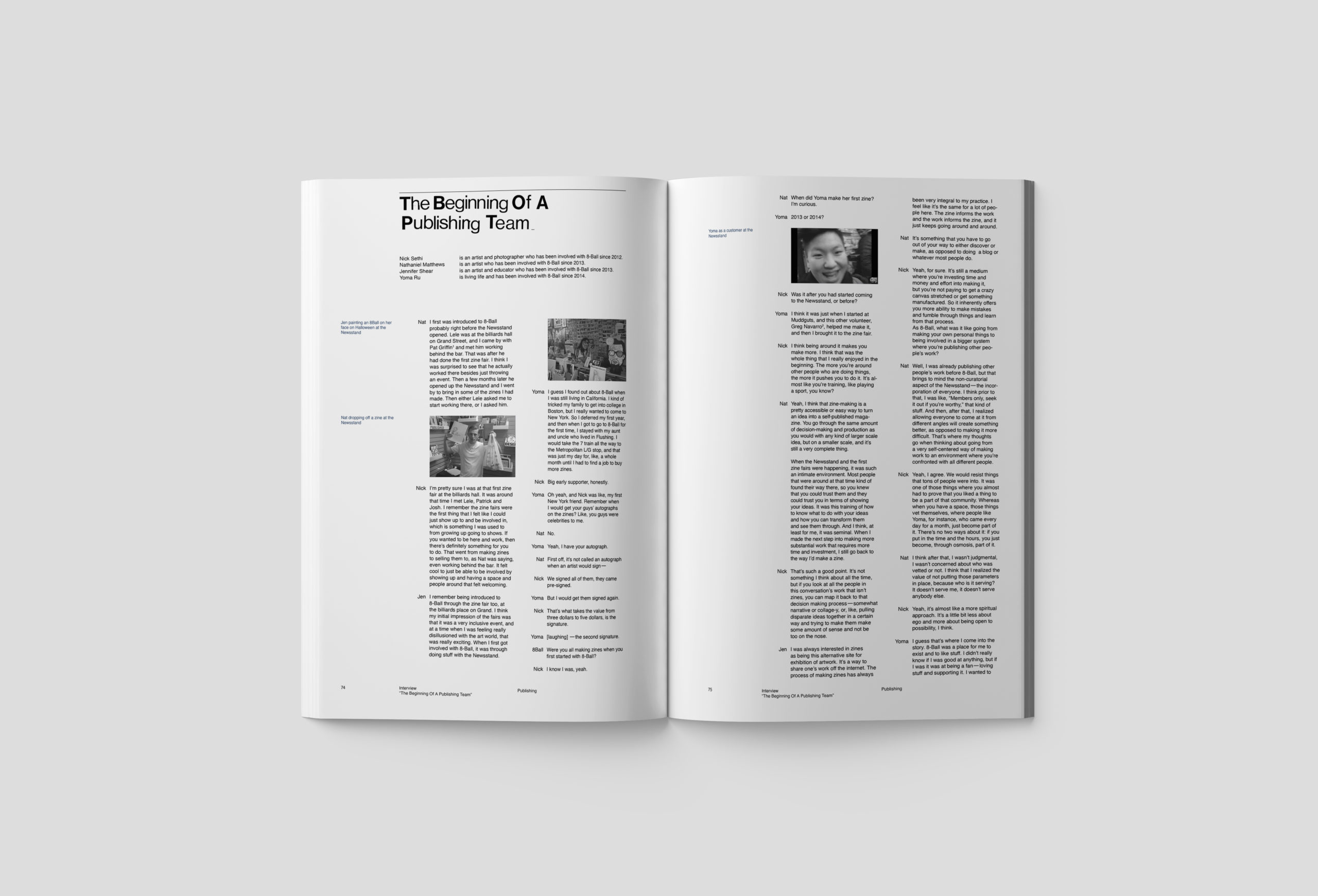 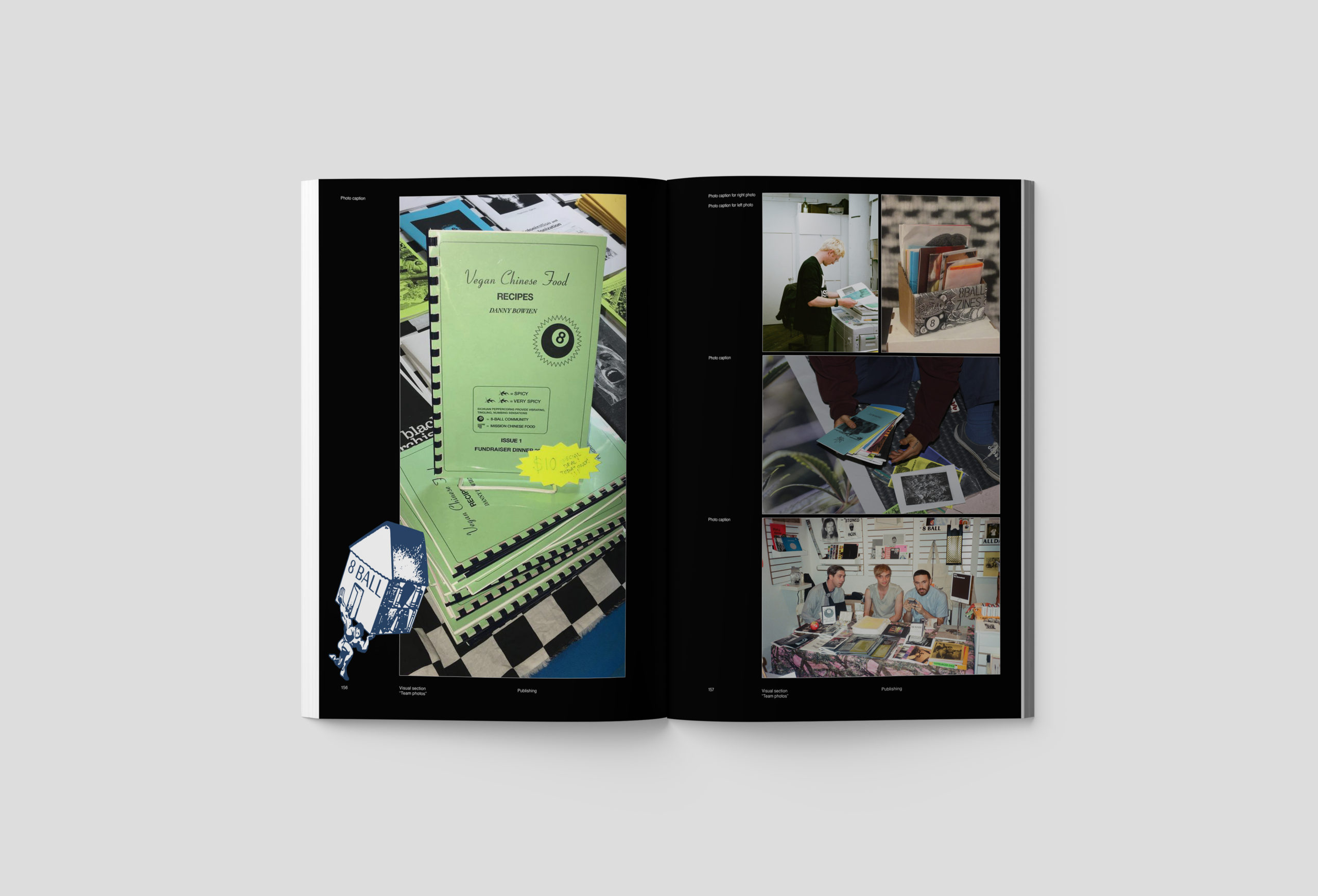 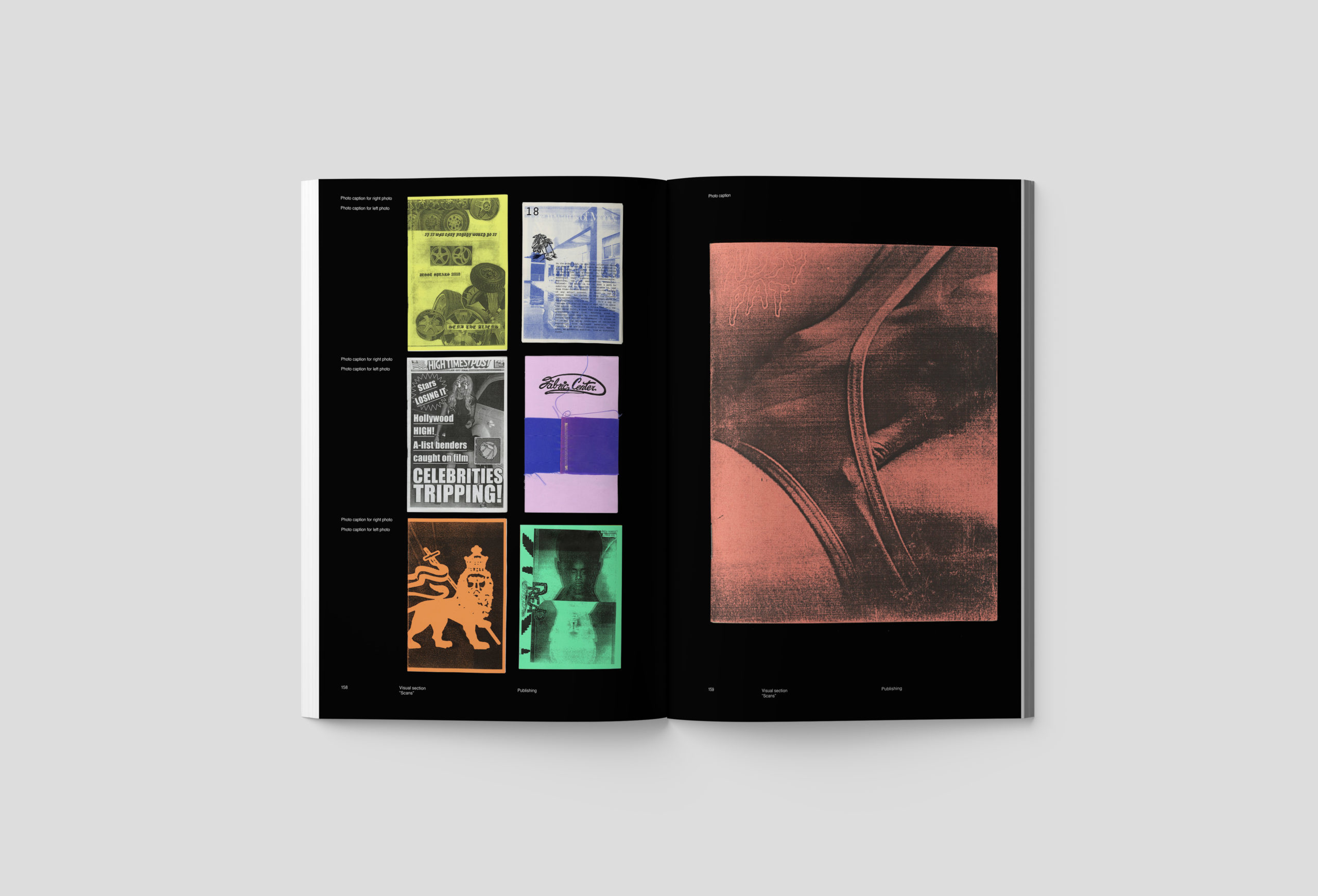 8-Ball Almanac is a collectively told oral history of 8-Ball Community, an organization of people who seek to nurture a community of art through the creation and maintenance of free and accessible platforms of expression. 8-Ball Almanac acts as both a retrospective of the decade since the community’s accidental conception in a dimly lit Brooklyn pool hall in 2012 and a guidebook for those who wish to cultivate a community like this one.

In the years since the first 8-Ball Zine Fair, the 8-Ball Community has grown beyond anything the founders had conceived of in 2012. Its scope broadened from organizing events and selling zines to archiving the physical evidence of the subculture they represented, broadcasting radio and television, and political activism. It’s an organization as fluid and ever-changing as its constantly expanding population of volunteers and affiliated artists, which now numbers in the hundreds.

In keeping with 8-Ball Community’s tenets of collectivism and non-hierarchy, the story told in 8-Ball Almanac is from the perspective of more than 100 people who have been involved over the past decade. Interviewed about their time with 8-Ball and edited by members of the community, their conversations are accompanied by hundreds of photos and scans of ephemera taken over 8-Ball’s history.

In the interviews, 8-Ball asks past members how things could have been better, what worked, what didn’t, why they left, what they remembered best, or why they’re still involved. The process of looking back is an attempt to trace the path which led the group to where it is now, so that those who wish to navigate the similarly murky waters of non-hierarchical organization might be able to see where the collective both stumbled and succeeded on its decade-long journey.

8-Ball Almanac is split into two parts, with the first half consisting of majority of the text in the book, beginning with an introduction by 8-Ball’s founder and longest active member, Lele Saveri, and a conversation between him and his fellow founding members Josh and Giuseppe on how the collective began. This half contains histories of each space 8-Ball inhabited in its decade of moving around New York as well as descriptions of each 8-Ball “team”: the events team, the library team, the publishing team, the radio team, the TV team, and the team responsible for activism and community outreach. The second half of 8-Ball Almanac is a visual journey acting as a visual counterpart to the first half through a selection of photos, scans, and documents collected over ten years. 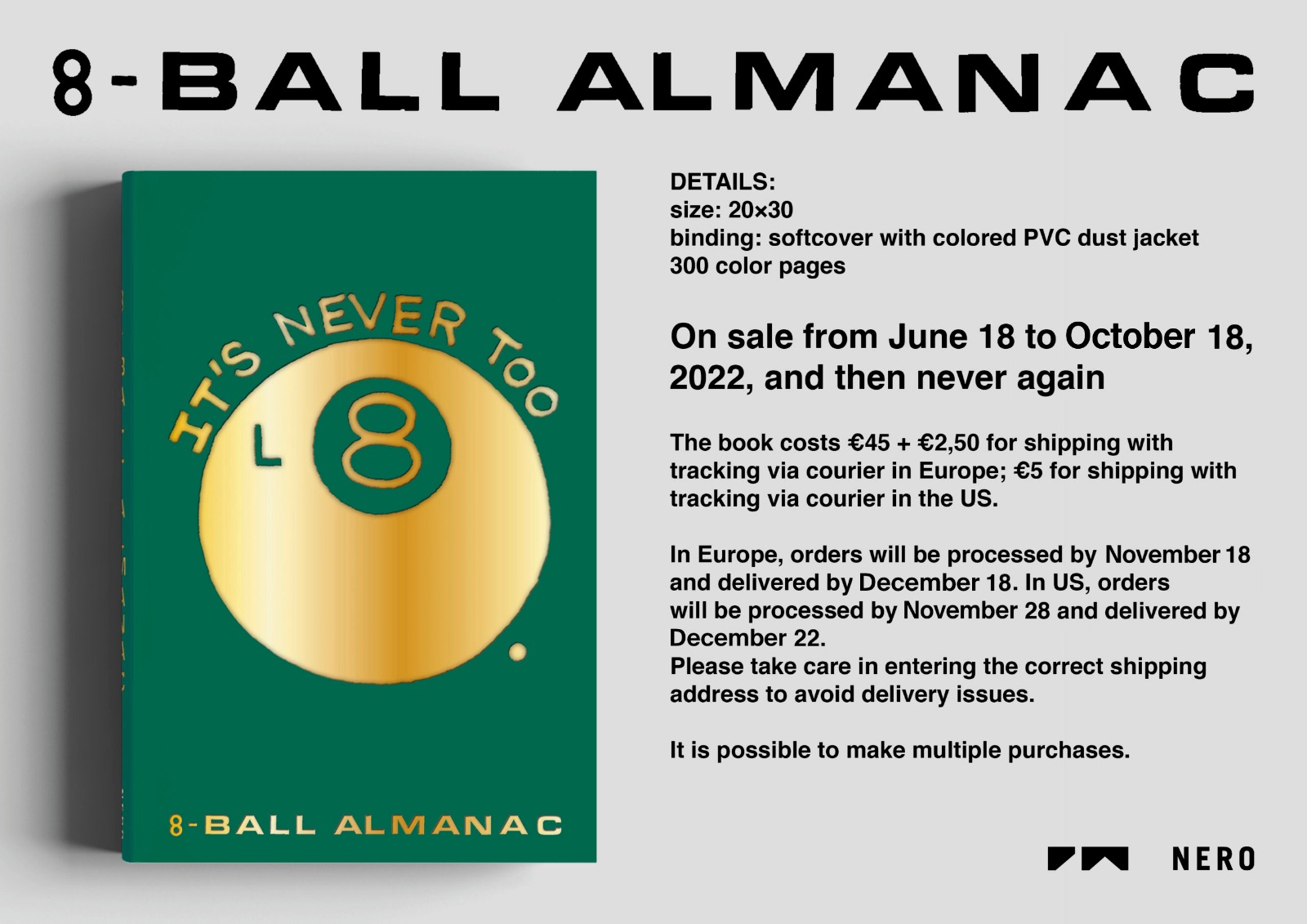 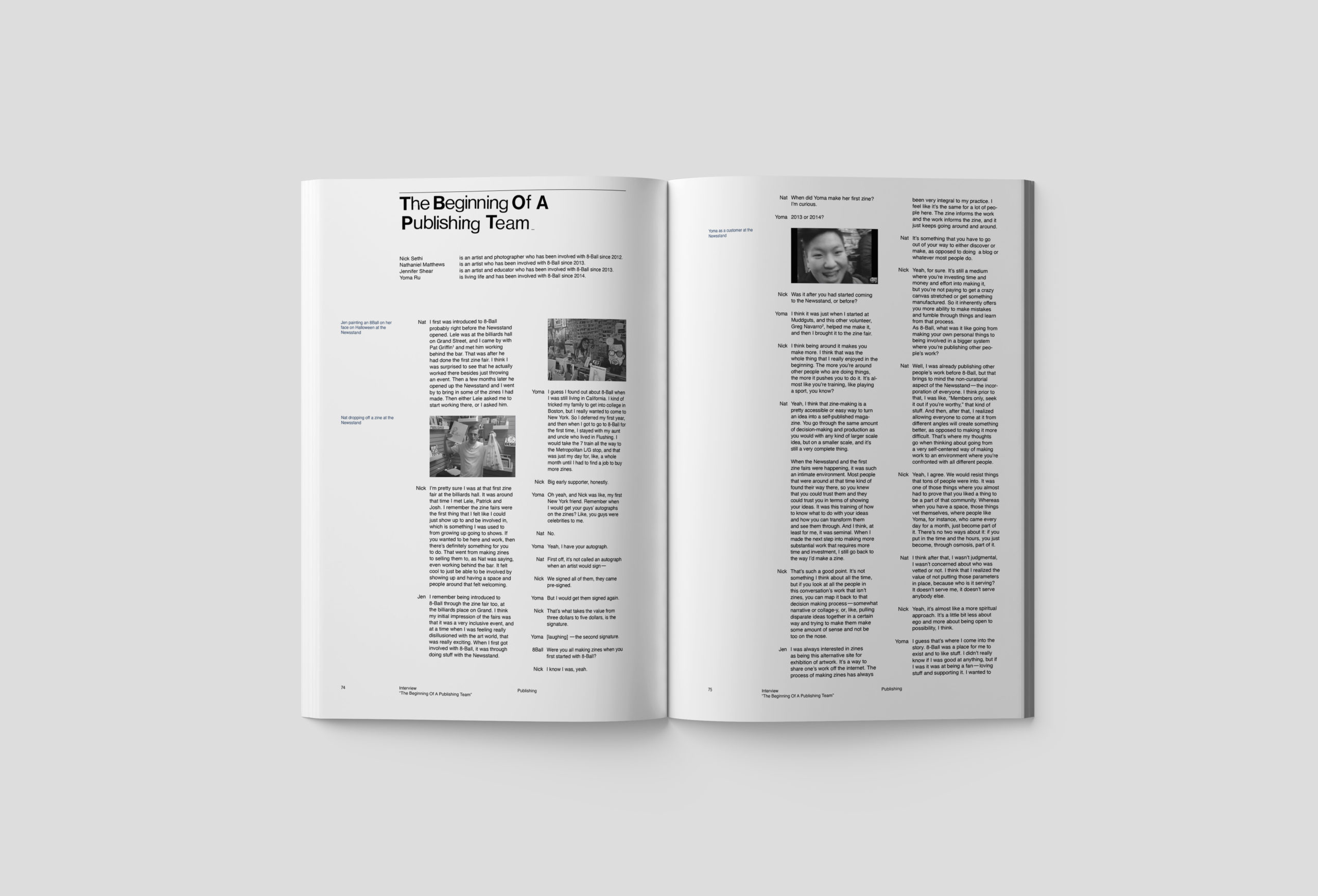